We're all familiar with financial debt - those credit cards that reduce your 'fun money' every month as you work to pay them down, or that damn student loan that's keeping you from buying a new(er) car. Anyone that works in Tech is likely familiar with Tech Debt - the concept that those old applications written in Visual Basic or some other oldish technology are progressively causing you to move slower and slower as modern tools improve and your old code starts to spaghetti.

Idea debt is a similar concept. Ideation is, of course, a critical part of the creation process, but hanging on to too many grandiose ideas will drag down your capacity to actually create.

I just sat down and put pen to Trello board to get all of my project ideas out of my head. Just listing home renovation projects and landscaping projects, I came up with more than 100 separate things I'd like to do.

It's no wonder I've been feeling a bit trapped by my own ideas.

Imagining your future projects is holding you back.

Motion design is your future

Following all the buzz surrounding Google's Material Design aesthetic, it struck me that animation and behavior was at the center of a lot of it. I've had several conversations around creating pleasing animations and reactions to a user's input and how adding this dimension to a design gives it depth and character far  beyond a typical 'dead' design. Designer Paul Stamatiou puts it this way:

Motion can and should go beyond a veneer of polish or delight. It's another avenue for adding personality, educating your users about how to interact with particular elements and for creating a story for the user...

In the next few years consideration for motion will be required to be a good citizen of your desktop/mobile/wearable/auto/couch platform. It will be an expected part of the design process just like people will begin to expect this level of activity and character in software.

In the very near future (read: now), designers are going to be required to know the ins and outs of animations, transitions and keyframes. And having grown up in Macromedia (erm, Adobe) Flash, this does nothing but make me happy.

The Slow Web movement is not about real-time notifications, up-to-date friend feeds or interrupting your lunch to tell you a recuriter would like to link with you.

Like Slow Food, the Slow Web starts with what it is not: the Fast Web.

Fast Food has an “I’ll know it when I see it” quality, and it has this quality because it’s describing something greater than all of its individual traits. Fast Food, and consequently, Slow Food, describe a feeling that we get from food.

Slow Web works the same way. Slow Web describes a feeling we get when we consume certain web-enabled things, be it products or content. It is the sum of its parts, but let’s start by describing what it’s not: the Fast Web.

The Slow Web is about changing behavior and adding value, imparting knowledge rather than vomiting information. Providing the right information, at the right time, in the right amount of detail.

That's a movement I can get behind.

Typekit has a tutorial on how to recreate the shading effect often used in sign painting with Typekit and css, complete with a Codepen/Typekit sand box to try it out yourself. The Typekit Practice site itself is organized around the idea that there is no science to typography, and the only way to master typesetting is practice. Bookmarked for inspiration, ideas and practice.

If you've attempted to target retina displays on the web in the past few years, you've probably realized that vector graphics are the future. The simplicity and accessibility of icon fonts is wonderful, and with resources like the open-source Font Awesome project at your disposal, it's easy to understand the appeal of the format.

However, Ian Feather's write-up on why Lonely Planet went all-in on SVGs has convinced me that icon fonts are not the end-all-be-all for vector shapes on the web.

One SVG icon project I've been paying close attention to is Iconic, a project that started out as one guy's open source project and exploded into a kickstarter campaign with nearly $100,000 of funding. From what I've seen, Iconic is an amazingly well thought-out and well-executed set of interactive icons.

And recently, the Iconic team followed through on a promise to keep Iconic open source with the release of Open Iconic, a set of icons comprising 218 glyphs that seamlessly integrate with the commercial Iconic icon set.

If you're interested in vector icons, watch these guys and the direction this project is going.

Update: Iconic recently made all Iconic vector forms available on The Noun Project.

The Google Ventures blog has a great article discussing the value of using storytelling to avoid the trap of designing individual, disconnected screens.

The best product designers practice story-centered design. They begin by crafting stories that show how customers interact with a product, and only after they’ve accomplished that do they design screens as a way to tell that story of interaction.

By telling a story about your users and the problems they're facing, storytelling - and related techniques such as story boarding- can help your team better understand the problems needing solved, as well as draw attention to the weak parts of the story - the spots where the problem isn't well defined and additional user research is likely needed.

Employing storytelling is a great way to make sure you're solving the right problem for the right people, and that you have enough information to approach the solution smartly.

Kyle Drake is bringing back one of the things that was wonderful and creative and exciting about the internet circa 1997: GeoCities or, in this incarnation, NeoCities.

This is why my goal with NeoCities is not to turn it into a GeoCities parody site, though I don't really care if people use it that way. The purpose of this project is not to inspire nostalgia. It's to rebuild the platform for us to be able to be creative again. To have sites that we can do whatever we want with. This is not nostalgia speaking. We really did lose our platforms for creativity and rich self expression online, and I want to help bring them back.

GeoCities was the catalyst that inspired my career. It introduced me to HTML, image editing, publishing and the excitement of being able to share my thoughts and creations with the world.

Sure the sites were gaudy and over-the-top. Yes, I still cringe knowing that I, too, made use of (at least one) animated 'Under Construction' gif. But the anonymity and freedom to create blindly, free of gatekeepers and the pressure of connections to friends and colleagues - having places like NeoCities - does indeed make the internet more fun.

Catch Me if You Can

Allen Pikes post get's it mostly right, but I think the 'Copy This, Assholes' is a bit off the mark. iOS7 is just Apple consistently doing what it's done for the past decade or so - steadily pushing the state of the art:

Even with tuned native software, the iPhone 4′s A4 chip can’t handle the most interesting aspects of iOS 7. The 3D, the blur, the compositing – all of them are disabled or degraded on the A4. iOS 7 is designed and developed for the A5, and will truly shine on the A7.

The original iPhone and iOS pushed the state of the art of 2007. After many iterations of hardware improvements, iOS is again able to push the envelope. This shouldn't be a surprise, but to many, it kind of is. And I think that's because not many corporations are able to envision the future and have the infrastructure and culture in place to relentlessly execute that vision the way Apple does.

It's not something we're used to seeing so consistently from a multi-billion-dollar corporation, and I think it's brilliant.

A good (and thorough) guide to Web form usability

This guide by Justin Mifsud over at Smashing Magazine is one of the most informative and well-balanced guides to Web form design and usability that I've seen on the web. Instead of blindly proclaiming oft-heard things like 'Labels above input fields are the BEST' Justin summarizes the advantages and disadvantages of each aspect, providing useful examples and sources along the way: 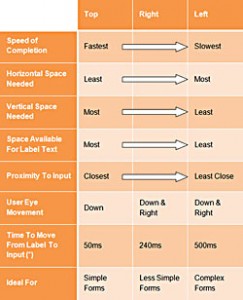 Contrary to common advice, above the input field is not always the most usable location for a label. It’s ideal if you want users to fill in the form as fast as possible. But there are times when you’ll want to deliberately slow them down, so that they notice and read the labels attentively. Also, keeping a long form to a single column and making users scroll down the page is better than breaking it up into columns in an attempt to keep everything “above the fold.” Each style of alignment has its advantages and disadvantages.

Working in government, forms are a huge part of what I do. If you deal with forms, check out Justin's post and share it with your developers.

Here's a few of the books Justin recommends:

Behind the typography of H&FJ

The AIGA has created a beautiful short video feature of Jonathan Hoefler & Tobias Frere-Jones discussing how they approach creating a new font (start with the H, O and D) and other insights behind their beautiful typefaces.